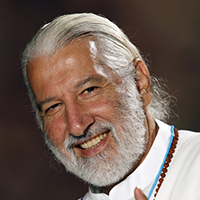 Healing the Earth is a Condition to Human Healing and World Peace: Towards Spiritual Medicine

Alfredo Sfeir Younis is from Chile. He studied at the University of Chile, where he received his Bachelor’s in Economics and Commercial Engineering Degree. Then, he studied at the U. of Rhode Island (South Kingston) and the U. of Wisconsin (Madison), USA, with a Master and PH.D. degrees in natural resources economics.

He was the first environmental economist at the World Bank, where he worked for nearly three decades since 1976, reaching the level of Director. As a World Bank Special Representative to the United Nations between 1996 and 2003, in New York and Geneva, he made important contributions to human rights. He has published extensively on matters having to do with economics, social development, poverty, human rights, and environmental/global issues. He has offered a new paradigm in economics based on human consciousness.

In addition, Alfredo Sfeir-Younis has engaged deeply into spirituality, alternative forms of medicine, and world peace. A spiritual master and a recognized peace leader, he has received many international peace awards including, for example, Peace Ambassador of GFIM; Life Time Ambassador of Peace given by the Khalsa Council; Peace, Mercy and Tolerance Award given by the World Association of Educators for World Peace; World Healer Award by the Lama Gangchen World Peace Foundation; and several others. He has engaged in new forms of integrated medicine to heal people and the planet. A unique exponent of “Spiritual Medicine.”

He believes that ‘spirituality must be where it is not’, with a special emphasis on spirituality within the public domain: economics, politics and business. He has written about spiritual economics for the last few decades and has offered a new paradigm to address local and global issues. Some of his publications include: “Another Meaning of Enlightenment”, “The 10 Spiritual Laws to Heal the World”, “The Power of Light”, “Global Warming and Inner Warming”, “The Tao of Management”, and the like.

In 2013, he ran for the presidency of Chile, as a member of the Green Party and, in 2017, he ran for the Chilean Senate. Currently, he is the Founder and President of the Zambuling Institute For Human Transformation, Chile.